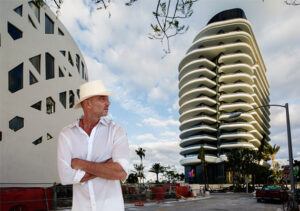 Amid all the buzz surrounding the Art Basel grand opening for Faena Forum, a company linked to Argentine developer Alan Faena is facing allegations in Miami-Dade Circuit Court of shoddy construction and failing to deliver a finished unit at Faena House.

Ruslan Shudrik in late October sued Tower 3315, a company incorporated by Faena to develop the ultra-luxury 18-story building, alleging breach of contract, negligence, and breach of warranty under Florida law. According to Shudrik’s attorneys Mark Kamilar and Bolivar Porta, their client has not been able to move into his 14th floor unit since closing on the condo 13 months ago ago due to alleged construction delays and defects.

“Mr. Shudrik purchased this unit for $8.6 million,” Kamilar said. “Yet he has not received the quality of service or product worthy of his investment or the brand name.” Faena declined comment through a spokesperson.

According to the complaint, Shudrik was notified in October 2015 that construction on his condo was complete and set the closing for Nov. 2 of that year. The buyer, who is a Russian national, alleges that Faena’s representatives only allowed him to do a walk-through of the two-bedroom unit hours before closing, the lawsuit states.

“During the walkthrough, plaintiff’s representatives found that the unit was not complete, had substantial defects, improper construction and requested to postpone the closing,” the suit says. “Defendant at the time acknowledged the problems with the unit and agreed to expedite completion of all items listed on the punch list.”

Shudrik alleges substantial portions of ceramic, marble, Terrazzo and wood floors had to be replaced, requiring partial demolition and other dangerous and invasive construction activities that rendered the unit unlivable. In addition, the lawsuit says, wall finishings, balcony railings, and air conditioning duct work were improperly installed, among other defects.

Nevertheless, Faena demanded Shudrik close on the unit despite the unfinished and improper work and promised the unit would be completed “expeditiously,” according to the suit. Porta, Shudrik’s other lawyer, said a general contractor and an engineer have provided written reports substantiating the lawsuit’s allegations.

“Mr. Shudrik is putting his faith in the U.S. courts to protect his investment in this high-end condo product,” Porta said.

DETERMINED and professional with genuine compassion- I have consulted with Mr. Porta on different issues regarding criminal defense and family law. His knowledge and professional advice has helped me to thoroughly understand my legal options and successfully navigate through a potentially devastating situation. I have confidently referred family and friends (assault with a deadly weapon charges; immigration; domestic violence) to Mr. Porta knowing he would be their best defense. He successfully was. I recommend attorney Bolivar Porta.

Great attorney- I retained the services of Mr Porta on several different legal matters over the past few years. Ok each occasion, he was extremely knowledgeable on the topics, very accessible, professional and delivered the results that I needed. I would recommend Bo to anyone needing a good lawyer.

Always there- Bolivar has represented me in criminal and family court issues and has gone above and beyond at all times. He is very determined and goal oriented. he will tell you the truth not what you want to hear but will go out of his way to get the best results possible. I would recommend Bolivar for any legal advise and representation.